Sprys / Calrossy Shorthorn X Angus steer named “Shane the Shangus” by the Calrossy students was awarded the Champion Trade Carcase and Virtual Taste test award as part of the replacement Sydney Show 2020 Led steer competition. With a weight gain of 1.87kg per day, liveweight of 493kg, a carcase weight of 272.4kg, fat specs of 13 & 6, marble score of 2, an EMA of 75 sq cm and calculated meat yield of 67.5%.

This steer, bred by Gerald & Lynden Spry of Sprys Shorthorn & Angus Studs Wagga Wagga, was prepared by Calrossy Anglican School and obtained an MSA index of 64.41 and total carcase points of 87.4. It was considered the optimum steer for the Woolworths Trade competition, possessing ideal meat quality to also win the Virtual Taste Test award. A big thank you goes to Colin Say & Company for taking over the organisation of this competition, Woolworths for their support and sponsorship and TEYS Tamworth.

Full brothers to the sire of the winning steer (Lots 22,23 & 24) will be offered at Sprys 56 years of Breeding Sale on Tuesday 21st April on property, “Ardlui” Wagga Wagga.

Are our mature cow weights becoming too big?

Written by Alistair Rayner, Rayner Ag and published on Beef Central.
Throughout this year’s drought, one emerging trend has been the topic of mature cow size.
There are a number of causes for this trend to develop. Firstly the on-going impact of poor
to desperate seasons across Australia has focussed many producers on the nutritional challenges
in maintaining larger cows.
At the same time, the increased selection of bulls for growth and carcase weight has seen industry
question the size of cattle being produced as reported in Beef Central following this years Angus forum in Albury, keynote speakers highlighted the challenges for processors and retailers from
increasing carcase size.
At the same conference, attendees heard from New Zealand’s Professor Dorian Garrick, of the increase of mature cow sizes over the past 30 years. professor Garrick, from Massey University,
suggested mature cow weights had increased by 100 to 150kg since the 1070’s.
Professor Garick told the Angus Conference the increase in cow size comes with additional costs to the producers. He told the conference, “The cost of feeding the average Angus daughter in 2017 was $57/head more than the average Angus daughter in 1980”.
Increasing mature cow size is one of the outcomes for many producers continuing selections for growth. While increasing growth rate is an important contributor to producing cattle that can potentially achieve higher carcase weights at earlier ages, there are other outcomes to impact on the herd. the most obvious has been increased birth weights and larger mature cows.
While some producers have been able to accommodate an increase in mature cow size, the current drought has exposed many producers to the new reality that their feed reserves are insufficient to meet a herd of larger mature cows.
Working with producers on their feeding programs highlights the impact increased cow size has on feed ration amounts.
As a typical example, an increase of 100kg liveweight, from 500kg to 600kg, will see producers needing to increase their “as fed” ration weight by 15pc. The implication for many producers
has been to see their feed reserves declining at a faster rate than budgeted for.
In some cases it has resulted in cattle being underfed and losing weight at a rate that was unexpected. In either scenario, producers were forced to make new decisions on the management of their cows, at time much earlier than they expected.

Given the influence of sires used within herds extends over three generations, it’s likely that mature cow size in many herds may continue to increase. I’ve seen this increase described as ‘frame creep’ where mature cow size gradually over generations as a result of past genetic decisions, and the tendency at selection to choose larger females as replacements.
Having observed the gradual increase mature cow size in northern NSW for the past two decades, I
am fairly sure the increasing trend is a result of ‘frame creep’, rather than a specific approach by
producers.
However, the flow on impact has implications that industry is now grappling with, as focus is bought
on both cow maintenance needs in drought and carcase weight for processors.
It is also important to highlight the economic impact ‘frame creep’ has over time within a herd. As
highlighted earlier, the cost to maintain an Angus female has increased over the past 30 years by
roughly $1.80/year.
Other examples highlight that increasing mature cow size fails to increase returns per hectare.
Some interesting More Beef from Pastures work by Dr John Webb-Ware demonstrated that at low
stocking rates, larger cows can be reasonably profitable, but once average or higher stocking rates
are achieved, there is no real economic advantage to cows exceeding a 550kg mature weight.
The inclusion of Mature Cow Weights within the EBVs for most breeds offers an opportunity for
producers to consider and select for mature weights most appropriate for their country and carrying
capacities.
A key feature of BreedObject Verion 6 is the creation of Indexes which include consideration of
maintenance requirements for cows, and this will offer producers increased opportunity to select
more appropriately suited genetics.
While there may be a natural inclination to attempt to select larger animals for replacements, it is
important to consider how much more feed larger animals demand and the impacts this has in
nutritionally challenging times, as well as on the efficiency of the breeding herd in general. 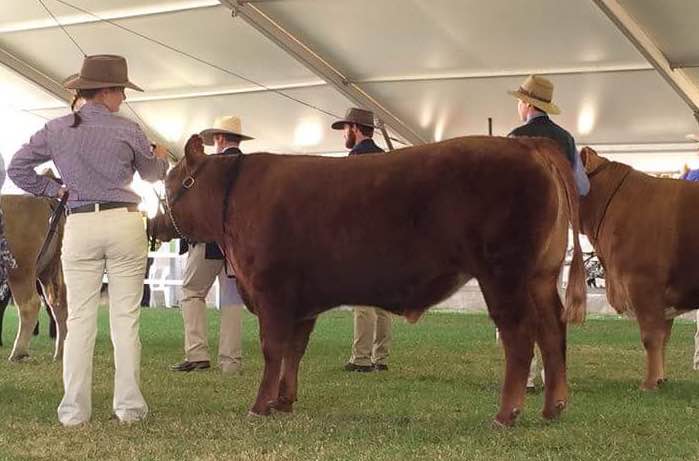 John and his wife Jan from Kingston, South Australia, are succeeding turning off steers which hit the heavy end of the European Union or MSA market at 20 months of age or younger with the influence of Spry’s genetics.

Shorthorn cattle have been pride of place in the paddocks of Wangolina Station owned by the Goode family for around 80 years. It is surrounded by sea on three sides and has an average annual rainfall of 640mm mainly between April and mid October. John admits about a decade ago it was difficult to have their March-April drop calves finished by the end of the following year’s growing season.

Rising levels of dystocia and the effect of pestivirus caused much thought as how to move forward to regain lost profitability. Changing the breed was considered but that would not have countered the pestivirus problem. In early 2003 Bob Gahan, the Shorthorn Breed Development officer at the time, suggested that the sire JR Legend be considered. JR Legend was imported by Spry’s Shorthorns at Wagga Wagga, from the United States.

Since introducing the JR legend line the maturity pattern of their 300 cow herd had altered from large framed animals with high feed requirements to more moderate framed animals which, calve with more ease. “Within 18 months we were seeing really encouraging signs and last year we had the best preg testing rate in many years .”

He says natural selection in the drought years in 2005, 2006 and 2007 really sorted out their females with those animals which were too late maturing really struggling to get enough fat cover to get in calf. Line breeding is not widely accepted in the beef industry but John is adamant using Legend siblings over each other has worked well breeding consistent lines of “true to type” steers and heifers for their self-replacing herd.

Over a number of generations the carcase shape and muscle and marbling of Legend have been stamped in his progeny. Increased carcase yield adds up to extra dollars and John says his steers are now achieving very high yields. John praises Spry’s stud principal Gerald Spry for his commercial approach to stud breeding and the change his genetics have had on Wangolina Station’s ability to hit its target market.

“He has a great understanding of commercial traits and the profit drivers for commercial breeders,” he said.

“He is really attuned to the commercial reality of the industry which some studs breeders aren’t and really takes an interest in his clients,” he said. Nearly all of Wangolina Station’s cattle are sold over the hooks to Teys Australia’s plant at Naracoorte with the average carcase weight around 320 to 330 kilograms.

“We are hitting the good MSA boning groups with our cattle and it gives us great feedback and opens up a new marketing avenue.” “In the last draft we had 120 steers and none were under fat,” he said. Seventy five head of Shorthorn steers from across the country were consigned to this test. The cattle performed amazingly, especially through one of the most challenging winters on record.

The progreny of Waukaru Patent 8161 excelled in the test. The highest profit steer of the entire test was a son of Patent and generated a check totaling $2,388.33 which computes to a profit of $683.89 after all expenses, including the feeder calf value.

Their hot carcass pay weight was 918 pounds compared to the pen avergae of 754 pounds. The overall win combines Weight gain on grass plus carcase which is the Ultimate, as we need cattle which perform at both ends of the spectrum so everyone is making a profit.

The Angus X Angus Shorthorn cross steers performed very well in the paddock and on the hook which was very pleasing for the Killalea family who were ecstatic with their win against many breeds and crosses.

Details of the competition are listed below

The Lardner Park Annual Steer Trial is the only grass-based steer trial in Australia, which provides producers with the opportunity to assess their cattle under independently controlled grazing conditions. The trial, now in its 44th year, aims to provide valuable information on the growth and carcase quality of steers entered. Cattle were processed on the 4th December and graded at JBS Brooklyn, on behalf of Coles. The MSA grading system was used to assess carcases; MSA measurements were then converted to carcase points using an Australian Beef Carcase Appraisal System (ABCAS). Compliant with the Coles QA grass-fed program, cattle are required to meet standard domestic trade specifications.

Carcase feedback reports were compiled for each competitor. These reports aim to provide entrants with their competition and carcase results as well as an eating quality analysis of how their entries compare to cattle within the trial, as well as against MSA eligible graded cattle within Victoria and NSW and nationally. This report uses figures relative to the 2018 calendar year.

The MSA Index, a standard national measure of the predicted eating quality potential of a carcase, has been used extensively in this report. The MSA Index, a number between 30 and 80, is weighted average of the predicted eating quality scores of 39 cuts across the carcase. It is calculated using MSA grading attributes which are influenced by the producer, and is a consistant benchmark that can be used across all processors, geographic regions and over time.

The 2018 trial commenced in June 2018 with 62 steer entries from 27 enterprises. As a group, the Lardner Park steers had a compliance rate of 88.7% to the carcase weight specifications: two carcases falling below 210kg HSCW and five carcases weighing above the 285kg HSCW.